Nevada gets a bad rap. Mostly originating from non-Nevadans. The gaggles of gawking gapers who arrive in waves to lay siege on Lake Tahoe or the hordes of zombies, hung over and burned out from too many days on the strip, pitifully attempting to board a Southwest flight back to Hartford (if you’ve ever had to connect through McCarran Intl Airport on a Sunday, you understand).

Nevada is, in fact, one of the last bastions of ‘minimally’ disturbed terrain in the lower 48.  It is host to dozens of mountain ranges and geological features, thousands of miles of isolated roads and trails, and a surprising scope of history – prehistoric through modern day.  There are numerous 13,000+ ft. peaks and Great Basin National Park.  A library of volumes has been written following ghost towns, forgotten railroads, abandoned mines, petroglyphs, geology, and botany of the region.

National Forest.  This area, between Austin and Eureka, is made up of a six ranges and four valleys: Ione, Reese River, Big Smokey, and Monitor.  The Monitor Valley is the least developed and arguably the most scenic.  It lies in between US-50 and US-6 and is 103 miles long.  The roads in the valley are gravel and in excellent condition. You should prepare yourself for a good dose of dust.

Our plan for exploring the area was to find a geological feature that we’d heard about called “Diana’s Punchbowl”, also called “The Devil’s Cauldron” and to poke around the semi-ghost towns of Belmont and Manhattan.  The plan allowed some extra days in this short-ish trip for whatever else we’d find along the way.

Heading eastbound from Reno/Carson/Tahoe, the best option for picking up supplies is the Ranch/Military town of Fallon. Home to Fallon NAS and Top Gun. East of Fallon there is fuel at Middlegate Station and Austin. Further East on US-50 supplies are available in Eureka.  To the south of the region is Tonopah.  Within the Big Smokey Valley, limited fuel and supplies are available in Hadley and Carvers.

campground.  An ideal springboard at the north end of the Monitor Valley.  The petroglyphs date back an estimated 10,000 years and are related to the Western Shoshone who inhabited the region.  Due to the site’s proximity to US-50 and heavy use, the clusters of petroglyphs have seen heavy vandalism.

Although we were traveling in early June and much of western Nevada had already started to turn brown, the central region was surprisingly still green.  The sagebrush was in bloom and flooded the valley with its sweet aroma.

To take advantage of daylight we turned south into the valley shortly after first light.  At this point, the skies were clear and wind calm.  Throughout the area, antelope and long-ears regularly cross your path.  The region deviates (geologically) from the great basin region’s mostly volcanic formations with limestone and granite outcrops and peaks.  A geologic and archeological study took place in this region in 1976  and provides a detailed explanation in the Department of the Interior official report.

The Devil’s Cauldron lies on top of a small, non-spectacular hilltop in the center of the valley.  Small in comparison to the hills that lie immediately to the south.  If not looking specifically for it we would have certainly not known it was there.  There are no signs and the feature exists on private property, so when accessing the location be mindful to close the ranchers gate behind you.  The cauldron itself is roughly a 100ft climb from the valley floor.  Its maybe 40ft across and 30ft deep.  The water is geothermal and clocks in at a temperature of 190-200 degrees.

Note: Skies were still clear but winds had ramped up significantly.  We guessed to a sustained 25 knots.

Continuing south we encountered an abandoned geological research facility at the base of Corcoran canyon.  According to the Shasta Gold Corporation, who has rights to Corcoran Canyon, this location was the sight of limited research between 1970 and 1990.  The station itself had clearly been abandoned decades ago.  A storage building at the rear of the property contained all of the previous boring samples from the earlier research. 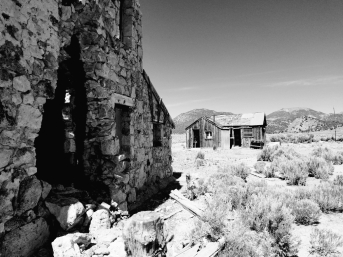 Further south there is a basalt formation, heavily weathered, that doesn’t appear on any map we possessed but Mr. Garmin informed us it is named Black Butte.  The nature of the formation is truly intriguing.  There is a 2-track that leads around to the uphill/west side of the formation.  From that angle we found two amazing locations to make camp.  Both sheltered from the wind but not the sun.  The formations almost seem alien in this environment.  Camping would be best in vehicle or RTT.  Ground tents not recommended as we crossed paths with several rattlesnakes when we were rock hopping. 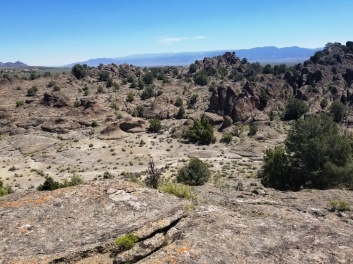 Proceeding into the town of Belmont was surreal.  The ruins of decades of mining and processing of gold and silver ore interwoven with the few locals who still call this home.  There is no grid and no centralized utilities so each homestead is on its own to provide power, heat, and water.  We came across about a dozen of them in a horseshoe tournament in the center of town.  As we wandered the streets and stopping at each building there were two commonalities, 1) an interpretive sign describing what the building’s purpose once was and 2) a second sign reading “private property, no trespassing”.  It was clear between the “no trespassing”, “no parking”, and “no camping” signs around town that we weren’t the first to come poking around, and everyone would be best-off if we made fast our departure. 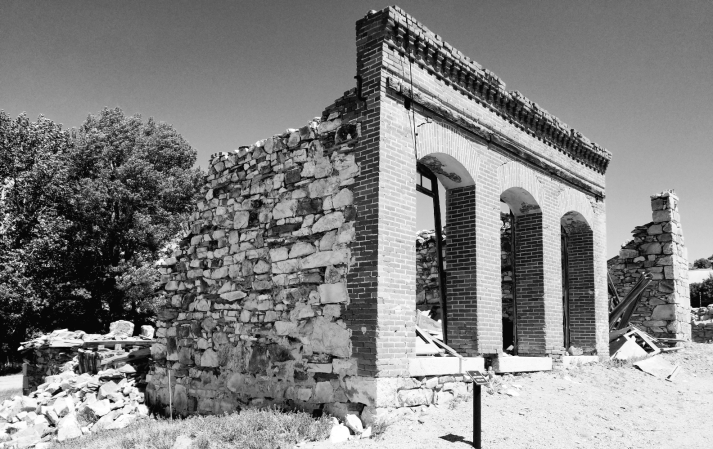 Belmont is a self-described ‘rowdy town’ (according to the state historical marker in the center of town) complete with a history of bar brawls, shootings, vigilante justice, hangings, and feuds.  Despite the handful of remaining residents, there were no open businesses (it was a Saturday).

20 miles to the east is the town of Manhattan.  Not significantly different than Belmont.  It doesn’t have the storied history, and the few folks we passed did acknowledge our presence and wave.  There is a saloon in town but it wasn’t open.

The one historical building we did come across was the remains of the Nye and Ormsby County Bank.  It is the only stone building that was ever built in town.  There was a commemorative plaque at the street edge and we were free to explore.  Inside the deteriorating walls, the roof had long deteriorated away leaving the hardwood floor to weather and warp.  The vault still remains and inside the precious metals safe in surprisingly intact condition. 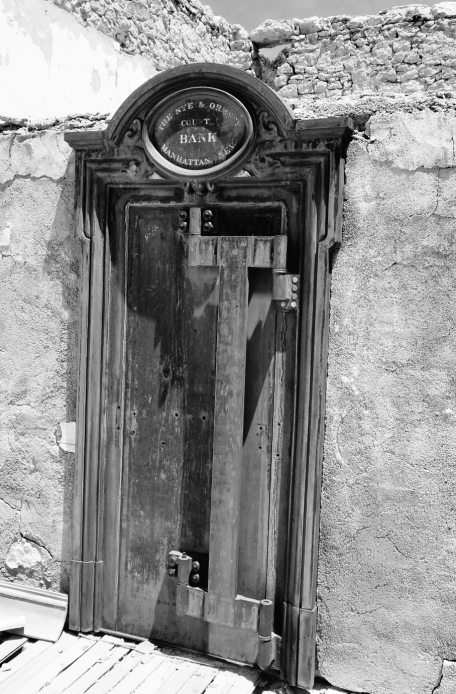 Continuing east and then north through Big Smokey Valley, now back on pavement, we passed by the round mountain mine.  Until recently this held the title as the largest gold mine in the world.  The sheer volume of terrain disturbed by this operation was indeed mind-boggling.

Note: Winds continued to increase and a thick cloud deck was building to the west.

Big Smokey Valley is boxed to the east and west by steep mountains with stunning granite formations.  It was still tripping us out to see dramatic peaks like these garnished with lush green sagebrush, piñon pines, and juniper trees.  So often when flying into RNO across the southern half of the state, Nevada looks like barren volcanic remnants, dried up lake beds, and strip mining operations.

Turning the corner in Austin, we set our last destination for Berlin-Ichthyosaur state park where we knew we’d find an established camp and access to water, that we were running low on.  The Reese River and Ione Valleys are easily as enjoyable as Monitor 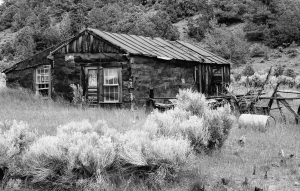 although they are more populous and a bit less geologically stunning.  The town of Ione remains, by its own admission, the ghost town that refuses to die.  There are a few businesses here, although I have never seen any of them open.

By the time that we had set camp this night the winds were steadily blowing at what we estimated was 30 knots.  Thick clouds had set in bringing early darkness with no relief on the horizon.  Temps were dropping.  We were encamped on an exposed ridgeline.  Camp was challenging.  Gear was blowing around.  Cooking was difficult.  The campfires sent embers everywhere.  We made our stay as short as possible.

The last leg of the trip brought us across buffalo summit and back to US-50.  We’d traveled this route several times before.  This time, we noted a half-dozen mobile military radar installations on ridgelines in the area.  They weren’t protected and we drove right up to them for a closer inspection. 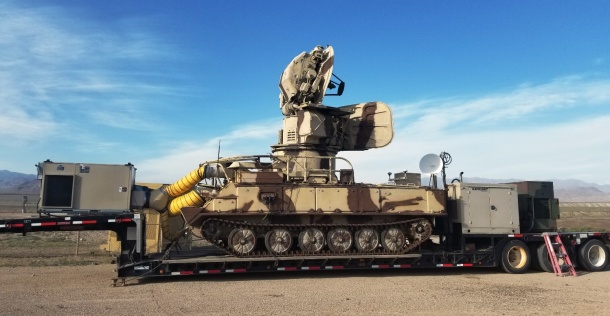 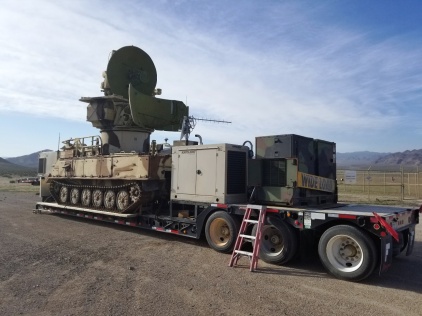 When crossing through the region we always stop at Middlegate station for a bite.  Greasy heaven. 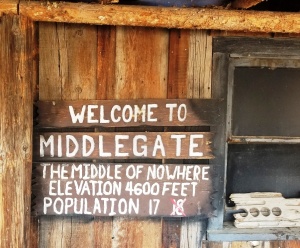 Good conversation. When asked, the locals told us that the Navy had been placing those radar tracking and jamming stations over the past 6-months.  Simultaneously they had been running prospectors off their land claims in a wide area surrounding the Fallon NAS bombing range.

Passing west of Fallon again, the sense of remoteness falls away.  Not long after, the sprawl of Carson City and still snowcapped Sierra rise back into view.